I have not had a ‘real’ pizza in so long. It has been SO long that when I took a bit out of this pizza, I actually had tears in my eyes. Serving in US, Vietnam, South Korea and UAE, this pizza joint has stolen my heart (and my stomach). Thin gluten-free crust that tastes delicious, fresh tomato sauce, topped with delicious zucchini and olives – ah, pizza pizza pizza! Guys, you have definitely got to give this gluten-free pizza a try! The crust was so delicious. I wouldn’t even mind eating it plain! It was that good! They even give you the option of having vegan cheese, which I have yet to try. They were out of it the last two times I visited. Here are the pizzas I tried:

Located in Dubai Marina. Gluten-free crusts available in Regular size only. Ingredients and prices listed on the website here.

I am so glad that I have finally found gluten free, corn free, AND oat free muesli! This muesli is AMAZING! I absolutely love it. Ever since I started eating it, digestion has felt a little better. It’s so good to snack on during the day as well. Perfect for the munchies and if you need to increase calorie intake like I did. It tastes amazing! I can’t go a single day without eating it anymore. I tried it with some goat yogurt but I didn’t like the taste all that much. Haven’t tried it with camel milk yet. I just eat it as is! Sooooo goooood! With 3.9g of protein per serving, this is fantastic for vegetarians/vegans!

Available in Spinney’s and Waitrose for AED 33.

I don’t know if it’s meant to be like this and I have no idea how long it will take to pass. I just want it to be over. My stomach is hurting so bad right now. I feel so horrible. There is air moving around in my stomach because I haven’t eaten all day. My stomach is making weird creaking noises and there is this wrenching pain that comes and goes. It feels like someone plunged a spear in, pushed it all the way through and just before it penetrates the other side, it is pulled back out only to be plunged right in again a few minutes later.

My upper stomach feels like the first millisecond you put your finger in fire. It burns but only slightly – quite like the burn you get from drinking alcohol or some sharp ginger juice.

And to think I have to do this again in a week. Granted, it’s not that bad. I’ve taken herbal medicines that have caused much worse pain, but this isn’t fun.

Initially, my stomach felt very light and digestion felt proper – better than it had in a long time. But an hour later, this pain kicked in and my stomach started creaking. Sigh. I’ve got a raging headache as well. Here is what I had to do today:

Have my last meal of the day at lunchtime. Drink apple juice

I would seriously recommend small doses or people who are as sensitive to stimulants like I am. MUCH smaller doses.

UPDATE: Okay, I have been feeling slightly lighter and better after the detox. My doctor says my stomach and gallbladder seem much better now and that the detox went well. I hope I never have to do this again! Wasn’t fun at all! The apple juice was delicious but drinking so much of it in one day was just too much for me lol.

Yesterday was okay. I figured drinking an entire cup in one go is easier than sipping. Sipping takes forever and makes me feel so full. My body was also aching terribly yesterday. My body has been aching for the past few weeks, but more so yesterday.

Yesterday, I felt a bit ill when I woke up but felt normal throughout the day. Right now, I feel ill again. I am so tired of drinking apple juice. So sick of it. And to think I have to do this again in another week!

Tomorrow is the dreaded day. No dinner – Apple juice & Epsom salt at 6pm and 8pm, followed by a grapefruit-olive oil concoction.

Oh.My.God. I am SO tired of having to run to the washroom constantly!

Since the juice has been turning black and getting all weird and foamy, I have decided to juice two batches. Much better that way.

I have had the worst headache all evening. Detox headache? Maybe. Perhaps it’s because I’ve been using my laptop all day with the screen adjustment off. I usually use a screen-backlight adjustment app to decrease the strain on my eyes which leads to headaches. Perhaps this may be why. I have been trying to work on my novel all day but just haven’t been able to because of this headache and the never-ending trips to the washroom. I’m getting closer to D-Day. Olive oil and grapefruit juice. Will I make it?

My doctor has recommended a liver/gallbladder cleanse since my gallbladder is being lazy. I mentioned to her that while I got better in between, I feel like I have regressed and am now constantly bloated, and feel excessive air in my stomach moving around. I also tend to have this burning sensation in my upper stomach from time to time.

The doctor said the bile has thickened and has formed a sludge and is on its way to forming gallbladder stones. Eeks. Enter Liver Detox:

The first four days are alright. It’s the 5th day that terrifies me. Half a cup of olive oil?! WHAT? WHY?

The apple juice is meant to make the bile softer and thin it out, I suppose. And the olive oil is to sort of lubricate everything. I’m not looking forward to DAY 5. Nevertheless here’s how DAY 1 went:

I ate normal meals. In fact, I felt hungrier, which is something that has been missing for quite some time. I have been struggling with trying to gain weight (I am terribly underweight) and increasing my appetite has been difficult, especially since I’m intolerant to several foods. I ate four meals today and I still had room for more! I just feel like munching on things all day long. This is a good sign.

Just spotted some new dairy free soy products in Carrefour – Dubai Motor City! Lots of stores around here sell soy milk as well but this was my first time seeing soy desserts on the shelves! This is great 🙂 I can’t have soy but I know it is a good alternative for many of you. If you do try it, let me know how they are! 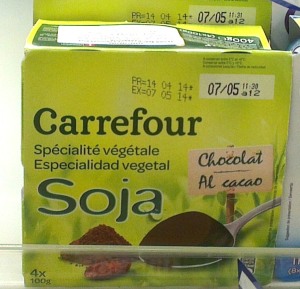 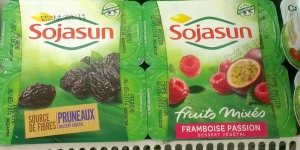 A couple of days ago, I stumbled across some posts on the internet about using honey to lighten hair colour. I have never really cared much for changing my hair colour. I don’t like unnecessary chemicals and dyes. But this seemed really intriguing so I decided to give it a shot!

My hair is dark and medium brown, straight, fine and I really wish it had more volume and that there was more of it. I wasn’t able to take a ‘before’ photo but I will put up some old photos where my hair can be seen.

There are so many different recipes out there for this so you can google it to find one that suits your needs. Here’s the recipe I used:

I chose to mix the first three ingredients together and let it sit for about 15 minutes. Then I applied it to my hair one small section at a time. Cinnamon powder gives the hair a reddish tint, which I didn’t really want so I added it in right at the end and used it on the ends of my hair. It also tingles a bit, which I, again, did not want to feel so I only added a little. I then tied my hair in a bun and put on a shower cap. I washed my hair after 5 hours. Most people do this overnight but I didn’t want it on my hair that long. Most websites say that it should be on for at least an hour. After washing, do not apply heat. Do not use a hair dryer or straightener. Let your hair air dry.

My hair felt conditioned and really soft. Several strands have turned a shade lighter and it looks like I have highlights! It’s very subtle and will require a few more sessions to become more noticeable but it is still pretty cool! My hair has always looked light-medium brown in the sunlight but in normal light, it looks medium-dark brown. If you look at the photo, you’ll see that my hair has some medium brown/mahogany streaks. The non-mahogany coloured hair is my actual hair colour. Pretty cool, huh?

Wow, it’s been a LONG time since my last post! I’ve been so insanely busy these past couple of months!

I’ve been to a new doctor here, after hearing lots of recommendations. The doctor did this test called NLS-Oberon Screening and the test showed that I have a parasitic infection. *Eek*

Before all of these stomach troubles began, I had experienced food poisoning and caught a stomach virus. This happened 3 times, and after the third time, I started feeling unwell a lot. The doctor believed this may be what caused it. Further reading led me to believe that bacterial overgrowth (SIBO) and intestinal parasites/worms can cause a lot of these symptoms that I experience, which the doctor referred to as IBS-like symptoms. She said that my stomach is inflamed and all of this is what has caused several food intolerances.

Right now, I am undergoing treatment – lots of herbal medicines coupled with homeopathic treatment. It’s hard to tell whether I am feeling better, because of the side effects of the herbal medicines, but the tests show improvement. I am no longer vegan. The doctor has advised introducing eggs and camel milk to my diet. My body has been having such a tough time digesting food. Apparently, camel milk works wonders and is suitable for lactose intolerant people as well. I am off sugar and starch (it feeds bacteria) and I really wish I could go grain-free but I don’t know what I’d eat :S I’m already terribly underweight! The good news is that since starting treatment and making these dietary changes, I’ve gained 2 kilos.

There is a hypo-allergenic digestive enzyme that the doctor recommended which has been really helpful. I take a pill after each meal three times a day. I used to have this heavy feeling in my upper stomach right after eating but after having started these pills, I don’t feel that anymore.

I also learned that raw garlic is a natural cure for both SIBO and intestinal parasites. I’ve been consuming a lot of it. However, be warned, it is a diuretic. No fun if you have to be outdoors! It would be worth reading into this – it could help you feel better!